Andrew has been selling his eggs since about August last year and this last weekend he finally is in the green and made his first profit! His eggs sold out again at Waco Downtown Farmers Market. He ordered 325 layer chicks (laying hens) a few months ago and they have finally arrived. On the way to pick up the layers from Ideal Poultry in Cameron I received an email that cornish rock broilers (meat birds) were on sale. So instead of 325 chicks we picked up an extra 150. Who doesn't love a sale? We had to buy a few extra capital expenses to shelter the extra chicks; back in the red. The dividends in enjoyment is keeping him going.

This is what 425 baby chicks looks like in my farm van. 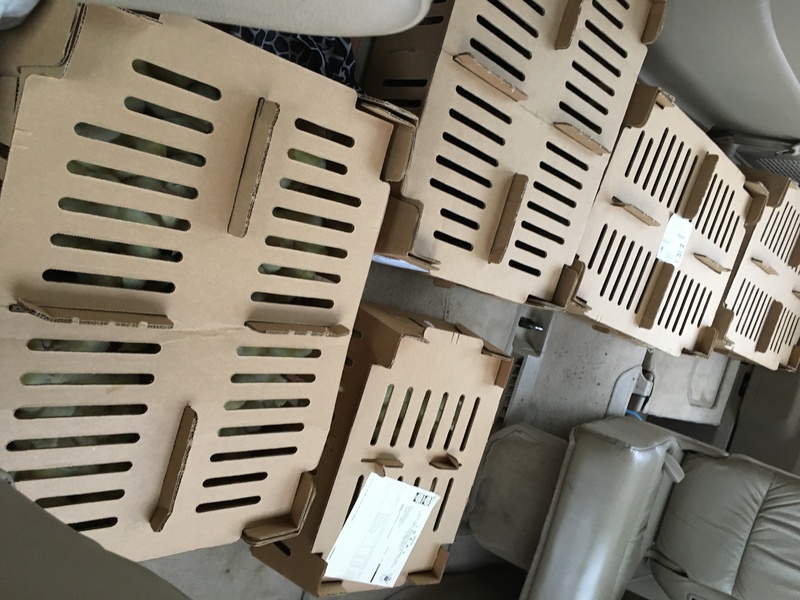 Our trip to the cattle auction was exciting. Surrounded by denim, boots and spurs, cowboy hats, a Kenny Loggins dead ringer, and a few ladies with bling, I felt slightly out of place with a skirt and flip flops. Maybe next time I'll wear earrings. Our shortest, stocky, Dexter bull calf that I thought looked a little goofy sold the highest per 100 pounds of weight. I'm still trying to figure out why that one was bid so high. We decided next time we have to learn "auctioneer lingo". Hopefully it is easier than Spanish. Honestly we were sitting there asking each other, "What did that sell for? Did he say designer? Is he speaking English?" The auctioneer was the same man who helped us unload our calves, so next time I'm going to stop and ask him to give me some quick instruction before we try to bid.

My new bees arrive by mail this week! The bee swarm that I put in our hive is flourishing. The honeycomb is expanding. No stings! I have heard some Hollywood types actually pay to have bee stings for medicinal uses. Hmm.